Chapel Porth and Porthtowan are two wonderful beaches in north Cornwall. They’re so close together, it makes for a perfect 5k circular walk or run.

Heading to Cornwall’s north coast, and running some old familiar routes on the south west coast path, is something I’ve had in mind for ages.

This running or walking route, from Chapel Porth to Porthtowan, allows me to retrace old steps, discover old engine houses, and savour some fabulous views of the north Cornish coast.

With my injury finally edging its way out of the door? , I decided to head off early one morning to Chapel Porth Beach.

I figured this circular route to Porthtowan would be about 5k, and I was right. Plus, as we have been blessed with fine weather, I want to make the most of being outdoors as much as possible

Chapel Porth is located near St Agnes. It’s owned and maintained by the National Trust. Chapel Porth beach is relatively small, particularly at high tide. The car park’s not massive either and with it being the summer, I made the right decision, arriving just after 9am.

The beauty of the Chapel Porth, and the north Cornish coast is its wild, abandoned, primitive character. When I’m scaling the south west coast path in north Cornwall, I feel like I’m on the edge of the world. It’s as if I’m the only human in existence. Maybe it’s the infinite Atlantic Ocean which thrashes against the rocks and knows no limits, or the rugged, weather-beaten coastline that entices me to drift from the busyness that’s around me. Either way. I welcome the salty breeze on my skin and the feeling of being in another land.

The aim today is to do a 5k circular run, interspersed with some walking. That, and take lots of photos of course, because I know it’s going to be a good one. 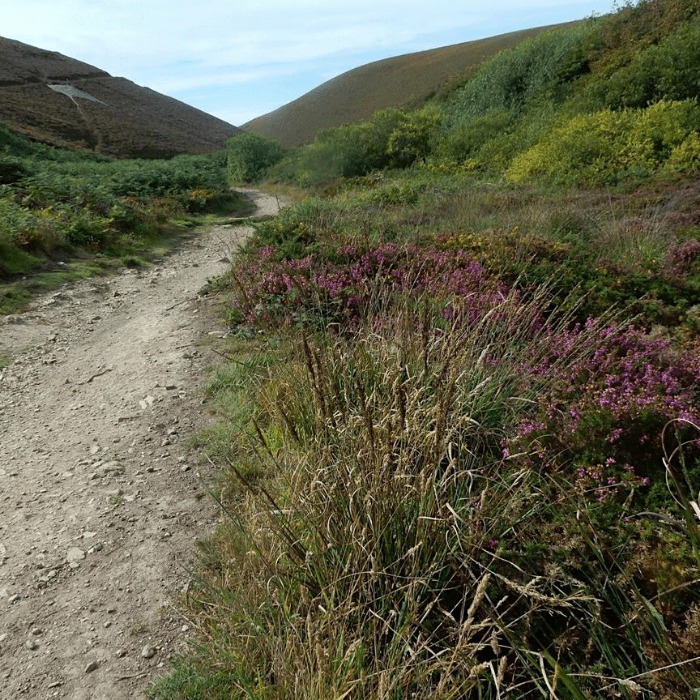 Heading Away From Chapel Porth

I start my run by heading away from Chapel Porth carpark rather than taking the steep coastpath. The path is just to the right of the cafe. Despite appearances, the seemingly flat path from the carpark gradually works its way up. I’m heading towards Chapel Combe and it’s not long before I see Charlotte United Engine House towering above me.

There’s so much history here. Chapel Porth is in the middle of a valley, and was once part of a thriving mining community. The path has mine shafts, wheel pits and spoil heaps dotted around it. Nature is also working its magic, with gorse and blackthorn in abundance. Plus, it’s always an adventure running the coastpath and finding new routes.

While there are a few other paths that lead from the main path, I stay on the same one until I reach the road.

On The Road To Porthowan

The road that acts a conduit between the footpath and coastpath at Porthtowan doesn’t last long. I head for Towan Cross, wishing that I was better at hills. But that will come.

I find the turning for the footpath, it’s the second one on the right, just after the Victory Inn. There’s the option of keeping on the road and heading to Porthtowan that way, but you know me! I like to go off the beaten track.

This circular from Chapel Porth to Porthtowan takes me past Towan Farm. This means that I have to look for a left turning onto a different path. It’s fair to say that I was pleased to have my trusty OS map with me, just to make sure.

A much needed downhill section leads me to the south west coastpath at Porthtowan. I’m high above the houses and Porthtowan beach but can make out the curved ripples in the sea. I can see the early bird surfers too, as small as ants, making they way into the ocean for their morning of adventure and exhilaration.

I love this view so much and reminded me of how much I enjoyed my morning of surfing at Fistral Beach, in Newquay.

The colours of the sea against the dark grey cliffs, the veil of mist lingering across the coastline, and of course, the pop of purple and yellow from the gorse. It’s nature at its best!

Does it get better than this?

Believe it or not, the south west coastpath from Porthtowan towards Chapel Porth evens out a bit. I embrace the gradual climbs – the perfect views definitely help. The ground becomes very stoney. I need to pay attention and look a few steps ahead as I run.

On the right, as I make my way towards Chapel Porth, there’s a high rock just begging to be climbed. On top, I get even better views of the beach below. I have a thing about being up high and close to the edge though. It’s the sort of thing that keeps me awake at night. On this occasion, it doesn’t feel too bad.

I steadily make my way down the coastpath and meet the path from the car park that I started out on. It’s only a few hundred yards to the carpark.

By 10.30 my run is done, and I feel great. I’ve yet to eat, but I was good. On this occasion I resisted the Chapel Porth Beach Cafe hedgehog ice cream. Very tempting, especially as I know how good they are.

One for another time, that’s a definite.

If you’re looking for some inspiration, you may like this post on ideas for outdoors activities in Cornwall, suitable for the whole family.